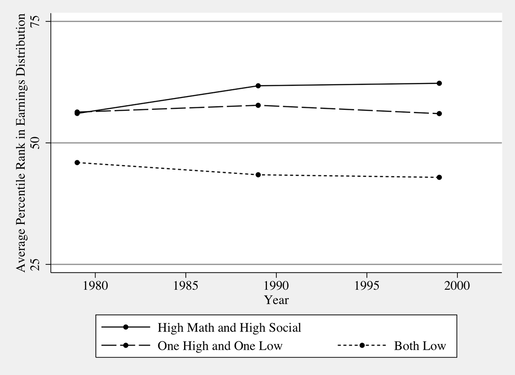 College and career choices study
The College and Career Choices Study is a longitudinal study of the factors considered by students when they make their college major and career choices, and of relationships between early choices and later outcomes, including occupation, earnings and time devoted to both family care and paid work.

Between 2002 and 2004, nearly 2000 students at 3 campuses agreed to participate in the College and Career Choices Study, and completed the base year survey.  More than 1000 of these were resurveyed 2-3 years after their initial entry into the study.  A third wave resurvey conducted in 2011-2012 received responses from nearly 700 of the original participants, 7-10 years after the base year survey.  A fourth wave resurvey was conducted in 2014-2015 so that participants previously observed only 7 years after the base year could be followed for a full 10 years.   Altogether, nearly 600 of the original participants were followed for 10 years.
Longitudinal study of u.s. scientists
​The purpose of the study is to extend our knowledge about relationships between early experiences and later creative productivity within a population of individuals trained as scientists.

In July 2007, I mailed 3500 surveys to members of the American Physical Society.  An astonishing number of very busy scientists responded.

Protecting confidentiality is an especially high priority in this research.  I personally attached the address label to each survey envelope.  No one else will know the link between individual personal information and confidential identification numbers.

Personality assessment trials
Personality is related to labor market outcomes including earnings and selection to occupations.  In research studies, there are tradeoffs between shorter personality assessments that do not take much time to complete, and longer assessments that do a better job of capturing an individual's characteristics.  In this study, I am simply trying to understand how the information collected in a very short 10-item assessment developed by Gosling, Rentfrow and Swann (2003) compares with responses to a slightly longer 16-item assessment that I developed for my longitudinal study.  I would also like to learn more about how each of these compares with the 44-item Big Five Inventory (John and Srivastava, 1999).